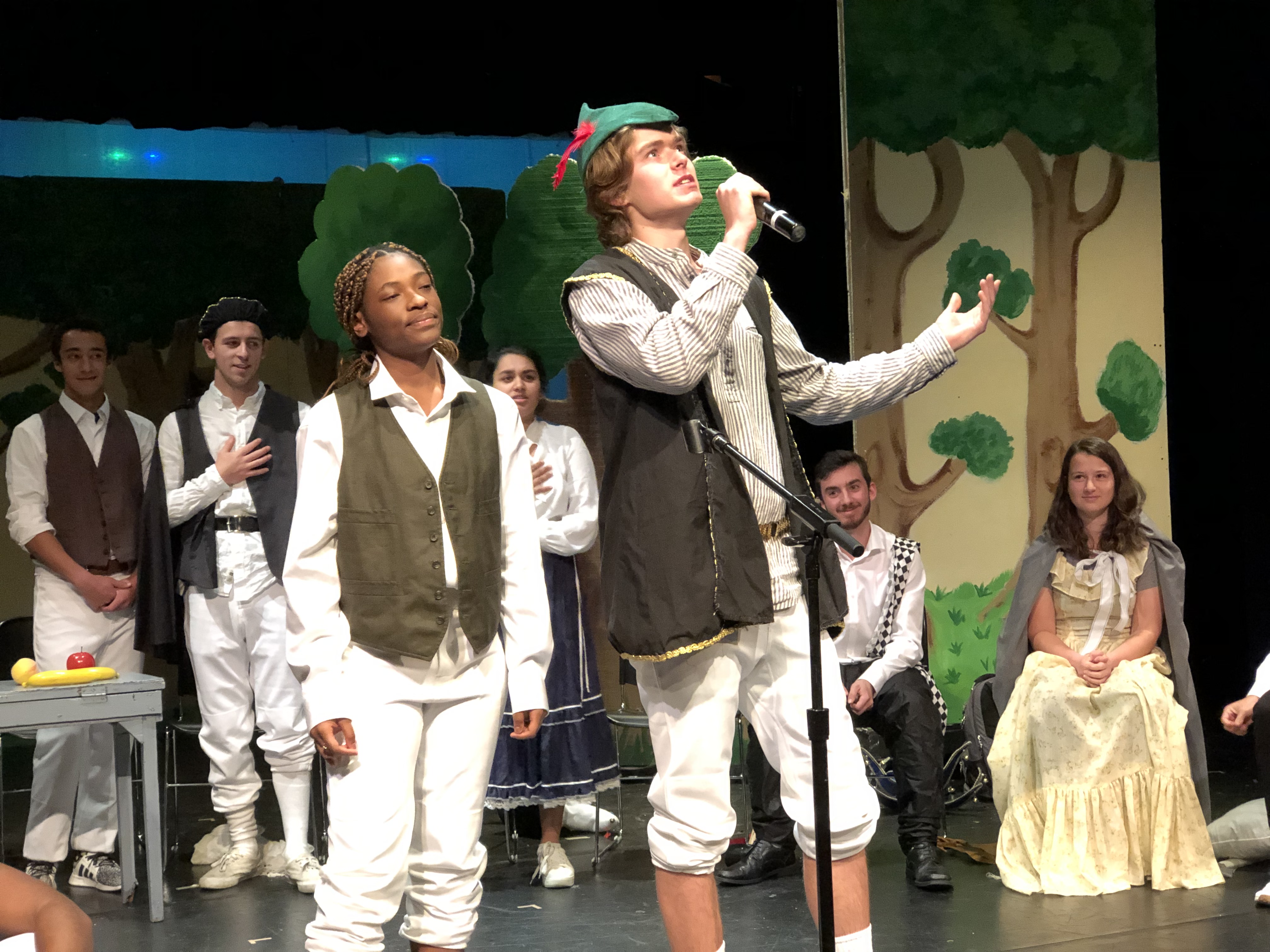 When asked about the Senior Play, three words recur among students and faculty alike: “chaotic,” “collaborative,” and “energetic.” The chaos stems from the constricted time frame: in four short weeks, the entire senior class stages a play—typically a Shakespearean comedy—with every single student playing a role, whether that’s performing on stage or running lighting, sets, or costumes behind-the-scenes.

“How many schools in this country annually enlist the talents of over 90 students to produce such a spirited play?” asks teacher Nancy Feidelman.

Upper School English teachers divvy up the organizational and creative work, with a different cast and director-pair for each of five acts. This set-up ensures collaboration. In this year’s As You Like It five distinct Rosalinds, five Celias, five Orlandos all shared the stage––and costumes, changing in and out of their white baseball pants. “The act of making a play is a great collaborative venture,” says teacher Andy Spear. “It can’t be done on its own.”

Seniors rehearse four times a week in their English block. “Real acting choices don't start until lines are memorized in the head and body,” explains teacher Khalil Sullivan. “On top of that, we're working with Shakespeare. It's a major challenge! Students and their directors have to analyze the text, memorize it, block it, and make sense out of their act. That's a tall order for a school production.”

“I had about 70 lines to learn and spent all weekend running them with my family,” says Kate V. '19, who played Rosalind. “She has such clever lines!” Kate first heard about the tradition as an eighth grader. “This is very nerdy, but when I was touring schools (I was new to the School), I remember thinking it was so cool that everyone got to do Shakespeare together.”

The final performance—there is just one!––crescendos into a surprising, energetic night. “The joy comes from the unexpected,” says Head of Upper School Carl Thiermann. Because each act has been rehearsed and directed separately, it “feels like looking at a play through a kaleidoscope,” says Andy Spear. “It’s Shakespeare like you’ve ever seen it before.”

"The Senior Play is an infamously funny production," says Cole B. '19, who designed sets. "It’s a tradition that often becomes the talk of the School and is especially passed down through students with siblings."

Some faculty members have even directed the play since the tradition began in 1989. “In my 25 plus years of directing, I have never been disappointed by the outcome––and have always so enjoyed the process,” says Head of School Crystal Land. “Perhaps my most favorite aspect is watching students develop confidence and stage presence, using Shakespeare’s language. It's a lot of fun––and it’s experiential learning at its best.”

Of the experience, Carl Theirmann quotes The Tempest: “O brave new world / that has such people in it.” Those people—his former students—often see him around the East Bay and “always recall the senior play and the parts they played.”

Khalil Sullivan thinks about the part that risk plays, in the theater world, as well, and wonders what plays Head-Royce will choose in the future, reminding us: “Theater is dangerous. Take all the danger out and you lose the potency and social necessity of using drama to hold a mirror up to real life… There's something valuable in taking risks, and that's what theater lets us do within a safe(r) space.”