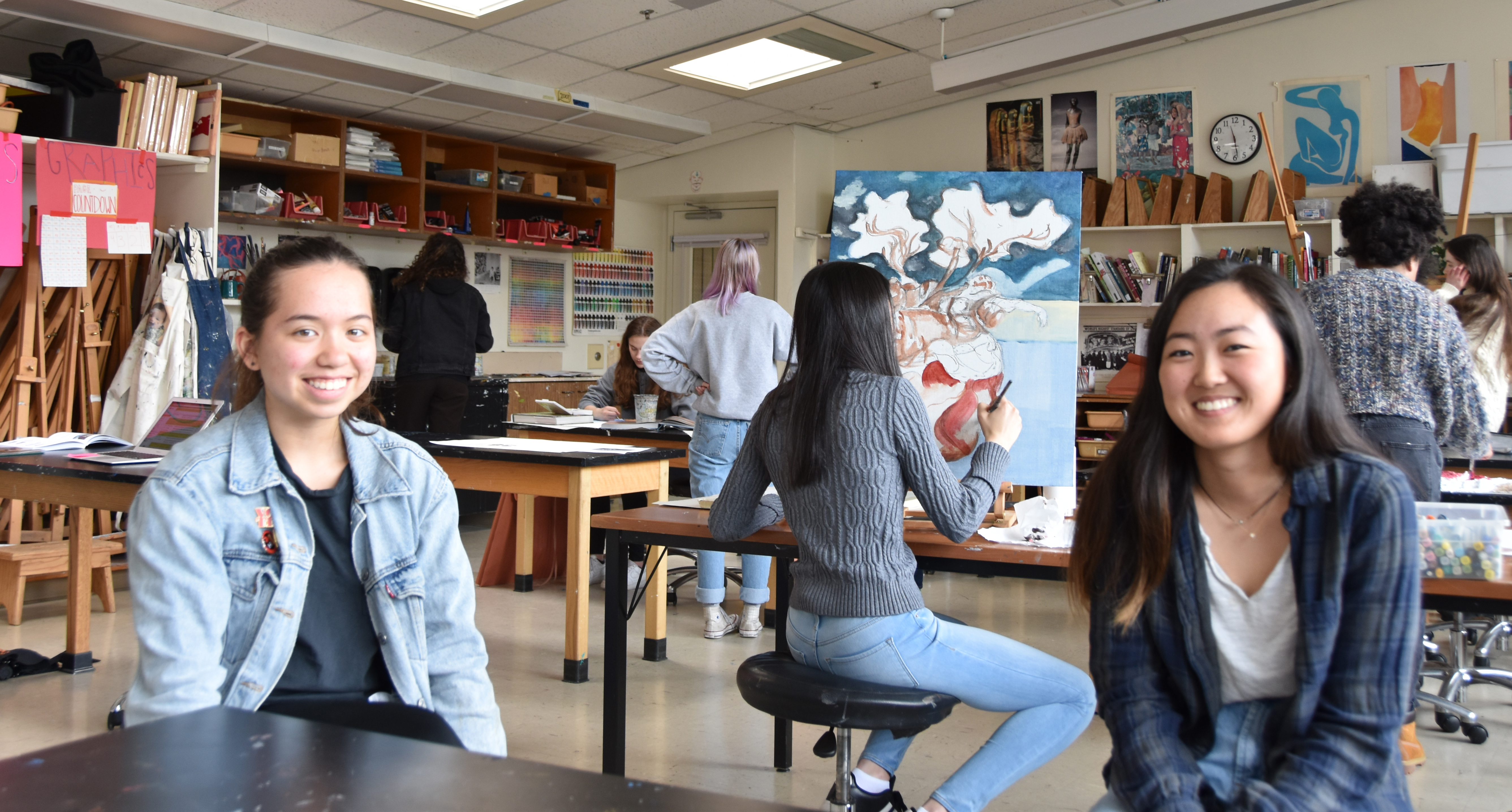 Hannah A. ’20 and Chloe K. ’20 pause for an interview during AP Studio Art

Competition was fierce at the 16th Annual Lamorinda Arts Council Awards, with over 200 artists in the running. As Hannah A. ’20 and Chloe K. ’20 milled about the gallery on the night of the awards ceremony, they were in awe of the high level of expertise and range of styles.

“Some pieces that didn’t even get honorable mention were amazing,” said Chloe.

Nodding, Hannah said, “All of the work was great.” The warmth, respect, and generosity between these two student-artists and their peers was evident––and commendable.

Both Head-Royce students submitted in the 2D category. Hannah’s pen-and-ink drawing, “Avian Anomaly” won first prize, marking the first time she has won an art competition. She admitted she “used to participate in more competitions” when she was younger, not placing, or sometimes finishing as runner-up. Earning the recognition of first place, after years of hard work, she said, “felt really exciting!” Hannah created the drawing of boots and birds for Ann Murphy’s AP Studio Art class.

“Most of all, I respect her imagination,” Ann Murphy said. “I wish everyone would rely more on this amazing thing we have: imagination. Hannah starts a project by problem-solving in her sketchbook. She might chat a bit about her ideas, but she is pretty independent and trusts her creative impulses.”

The first prize-winning “Avian Anomaly” drawn in pen-and-ink by Hannah A. ’20

Chloe won third prize for an oil painting of heirloom tomatoes that she made at an after-school art program in San Francisco. Oil has become her favorite medium, as it’s “easy to blend.” These two pieces are now on display at the Art Gallery at the Orinda Library. The exhibition runs through the month of March.

When asked how it felt when their names were called, both students laughed a little. “I was super surprised,” said Hannah, “because they’d called Chloe’s for third place, so I was like, well that’s it I guess!”

Chloe shook her head and smiled. But Hannah’s modesty was entirely sincere and she continued to compliment her friend. “Yours is hyper-realistic––and oil is not a medium that teenagers have a chance to use, so with that fact, I figured you’d win.”

The two students have been making art for as long as they can remember. “My grandma is a painter,” said Hannah, “so she’d paint a lot, landscapes mostly, and I’d try to join her.”  Chloe began taking art class in San Francisco in the sixth grade, in addition to enjoying the art offerings at Head-Royce.

Both hope to continue making art in college. “I want to major in bio,” said Hannah, “but I might minor in art.” Chloe “might apply to college under an art major” and hopes to find a career in an art-adjacent field. For now, Hannah and Chloe are enjoying developing their technical skills and knowledge of color theory in Ann’s AP Art Class, while watching the seniors develop their portfolios for the AP Studio Art II course.

“The Junior artists just completed an exploration of extreme emotion on the face of an elderly person,” said Ann Murphy. “Artists juxtaposed the portrait against a landscape that is exactly opposite of the emotion depicted in pencil. Students learned about design elements of contrast, emphasis, and movement.” Many of these pieces will be on display at the All-School Art Show on Thursday, March 14, from 4–6 p.m. in the Community Room. Be sure to stop by and see awe-inspiring pieces by these two award-winning artists and many other talented students at Head-Royce.