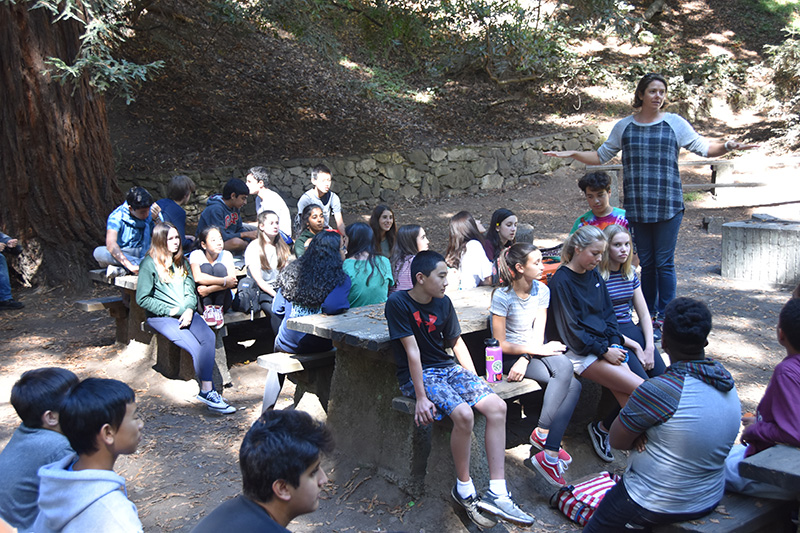 Students listen to teachers explaining the rules of the game.

On a recent fall afternoon at Joaquin Miller Park, 8th-grade science teacher Kristin Dwelley poured white flour across an empty grass field in preparation for an 8th grade history and science collaboration project. The flour was being used to establish makeshift boundaries to separate 8th grade students into groups of various sizes. This project, a first of its kind at Head-Royce, was intended to deepen students’ understanding of the Latin America and Africa units they’d been studying.

“I have no idea how this is going to go. It will be such a surprise,” Dwelley said.

Unbeknownst to them, the 8th graders were about to play an academically-enhanced version of capture the flag. But, in this game, the flags (represented by pennies in a tin can) represented the natural resources and GDP of a country. Each team member had to strategically move across borders in hopes of capturing the resources of another country in order to bolster their own. The idea was to start a dialogue amongst students that connected geology, ecology, and politics, and to give them a first-hand experience of the power dynamics created by resource allocation, population density, and borders.

As the students arrived on the field, they were put into their predetermined groups. One group consisted of 20 students; another had 10 students, and yet another had six people. Some students, not fully understanding the project or the goal immediately, became disgruntled.

“This isn’t fair! How can one team have 20 and another have only six?” one student exclaimed.

“Well, think about it. That’s exactly the point,” another student responded. And she was right.

The students had an entire field to use as their game board. The blowing of the whistle indicated the start of the game. To prevent their GDP from being stolen, teams were allowed to hide their can of pennies wherever they wanted within their country’s borders. This further frustrated some students who didn’t have trees and other foliage to keep their GDP out of danger.

“Some countries are landlocked, some are way off in the distance, some have very valuable resources, and others have a big population,” Dwelley said. “The frustration some of the students had was intentionally designed. We want them to experience and uncover what it means for a certain country when resources aren’t shared evenly, and which countries get ahead with certain resources,” she continued. 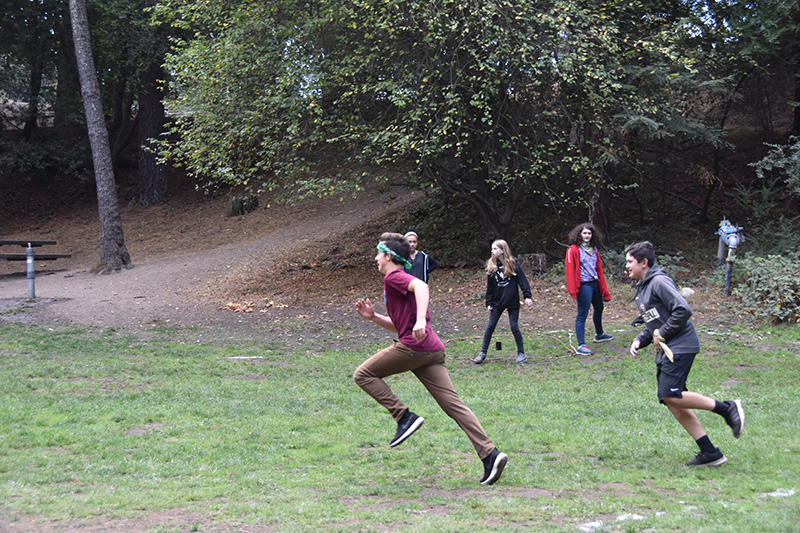 Students attempt to capture pennies from their classmates during the game.

The game unfolded in five rounds, and, at the end of each round, a new rule was introduced to add to the game’s complexity. For example, during one round, the countries were required to pay taxes—one penny per team member. If the team didn’t have enough pennies, each person had to find another team that would accept them. The game wouldn’t begin again until each member had a team to play on.

At the end of the final round, teachers assigned to each group calculated the total GDP of each country. They also took a poll to assess how much students enjoyed the experience, and how fair they felt the game was. They wanted to see if student enjoyment was dependent on team resources— a theory that proved true! Teams that had more players, resources, safe places to conceal their resources, and a location on the outskirts of the park won the game.

Students had an opportunity to debrief about their experiences a few days later in their advisory groups. They discussed their strategies and the connections to what they had been learning in their science and history classes.

“We had the smallest area and we were in the middle of the field. Our plan was to determine how many allies we could make so our pennies weren’t stolen. We wanted to keep our coins in our can, but it didn’t always work. We didn’t have enough people or places to hide our coins. They were just out in the open,” Farhan H. ’23 said. 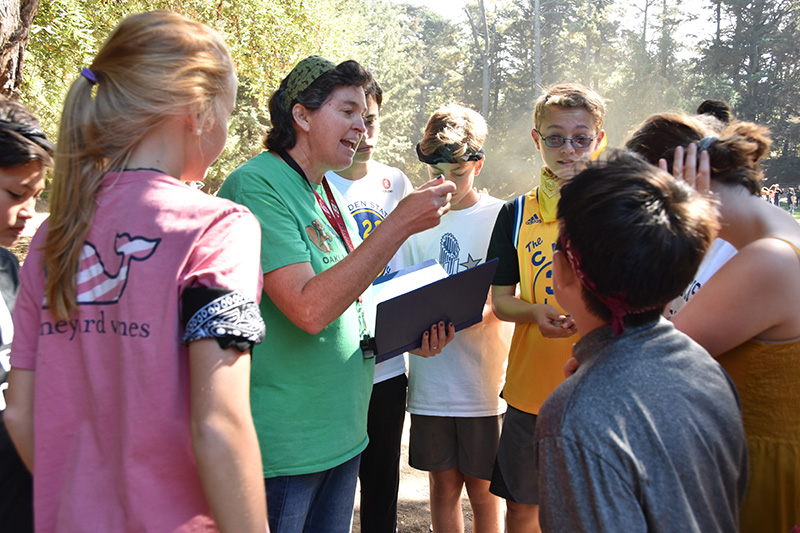 Students pay their taxes after a few rounds of the game.

The integration of science and history was implemented last year, when 8th grade science teachers decided to move the study of ecology from 7th grade to 8th grade. Since teachers were revamping the unit, they decided to explore an interdisciplinary opportunity in its place. So far, students have thoroughly enjoyed this work and there are plans to iterate and continue to develop interdisciplinary projects each year that bring classroom studies to life in innovative ways.