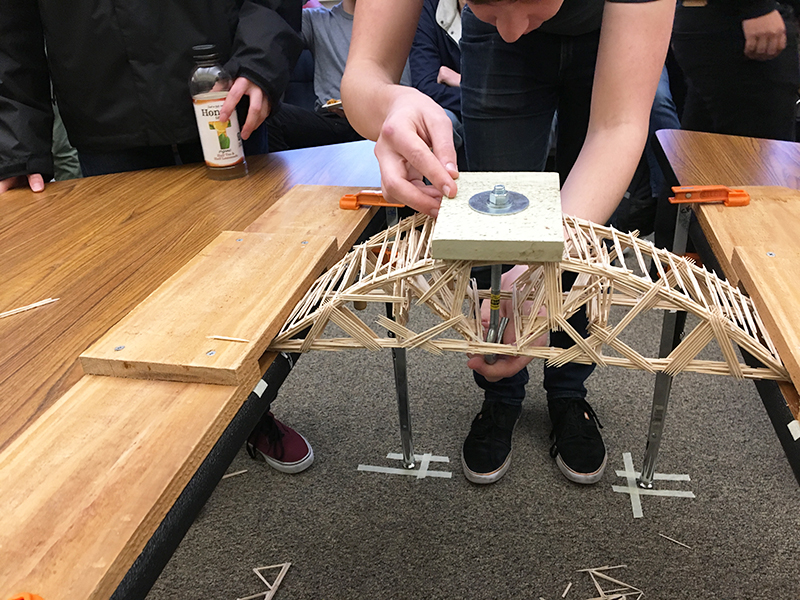 In its fourth year at Head-Royce, the toothpick bridge building contest is still turning heads! In Chris Kinney’s Principles of Engineering class, students had two weeks to design and build a bridge made entirely of toothpicks and glue. Not only did the bridges have to span 40 centimeters and be no longer than 70 cm, but they also had to support the weight of real weight plates and dumbbells for 10 whole seconds!

“I try to keep the project as open as possible; two boxes of toothpicks and a four ounce container of Elmer's glue. Over the years, I've had to add more rules and regulations just to close loopholes that students end up finding,” Kinney said.

This building model is an exercise in both creativity and problem solving, and is currently used in colleges and universities. It provides students with a low cost, hands-on building activity that gets them into the mindset of a real engineer. Students worked in teams of two to complete the project.

Blythe R. ’18 and her partner based their design off of a bridge constructed out of balsa wood they found online, as well as the Park Street bridge that connects Oakland to Alameda. They relied on basic principles in geometry for their design.

“Since the toothpicks tapered to points, there was only so much cylindrical wood we could use. If we decided to use the whole toothpick, we had to figure out how to overlap them so that they would stay together with the help of the glue. We did not focus on calculating the strength at all, but we definitely had to figure out the optimal lengths and shapes to use in our bridge design,” she said.

As is the case in many building projects, some students experienced a high level of frustration that pushed them to their breakthrough moments.

“It took a long time for the glue to dry, so there was not much we could do during one sitting. We had to wait for the glue to dry or use other tools to help it dry faster. In addition, since it was a rainy day, the moisture caused the glue to weaken, which compromised part of our structure,” Blythe said.

Despite the setbacks that some students encountered, most were satisfied with their work. And, the overall goal of piquing student interest in engineering was definitely achieved.

“I think just building the bridges, seeing how much weight they support and having students asking questions such as, ‘Wow, how is that possible? Can I make it even better? And what can I do to better this?’ is at the core of engineering,” Kinney said.

The bridge that held the most weight in this year’s project held almost 200 times its weight.