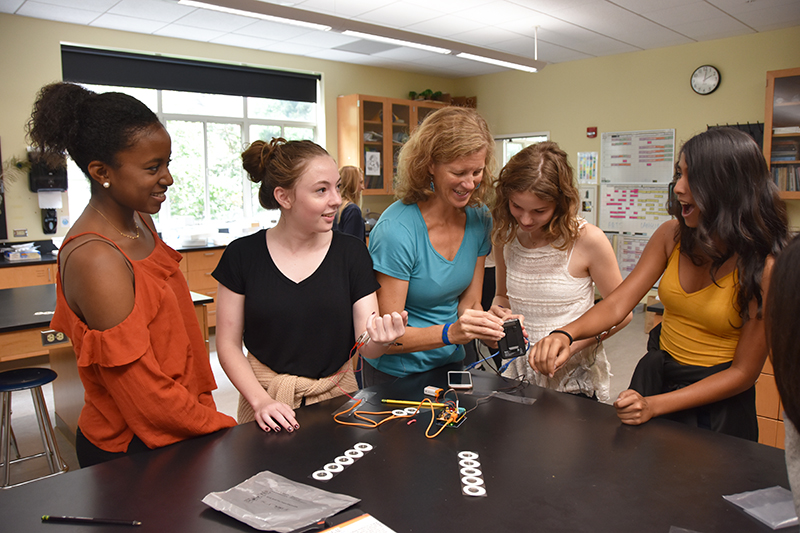 While it’s not unusual for upper school students to get on each other’s nerves from time-to-time, the euphemism took on an entirely different meaning in one of Jen Brakeman’s recent neurobiology classes. Students took turns hooking themselves up to a machine called the human-to-human interface, which allowed them to control the nerve movements of one of their peers. Watch the video to see the lesson in action!

Students were learning about the electrical activity of neurons, and this particular activity helped them put what they’d been learning on the whiteboard into practice - using their own bodies as a guide.

Nila V. ’18 participated in the activity as both the controller and as a subject.

“It feels like a lot of pulsating shocks, not painful, but just surprising. It’s very surreal to have your body move without your control,” she said.

In addition to seeing their learning come to life, the students got to hear it, too. The class used another machine that created sound when connected to muscles.

“When they engaged the muscles it turned it into an auditory sound so that they could hear the frequency with which the action potentials were happening,” Brakeman said.

This is the first time Brakeman has used these machines for a lesson, and she says they were a great tool that aided in the learning process.

Bird's Eye View is a story series highlighting our work towards the initiative and goals laid out in our Strategic Plan: Bridge to 2022.