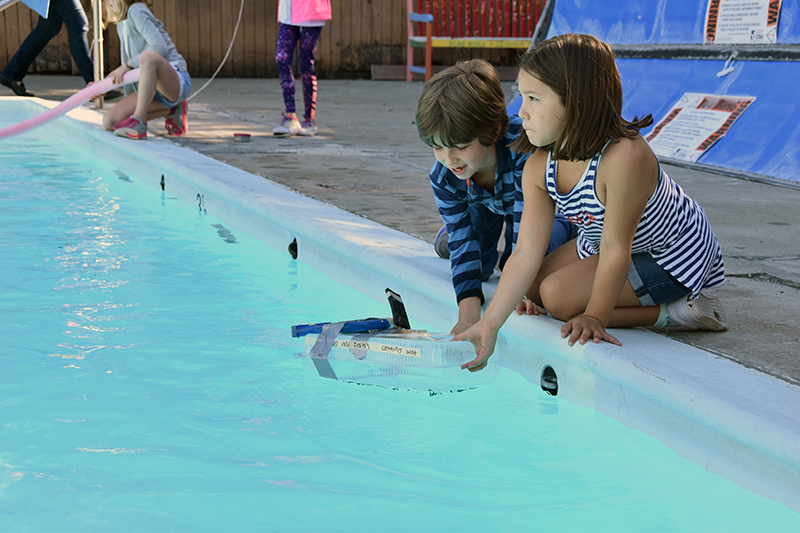 Every day at lower school recess, students have the opportunity to either play on the “Big Toy” or spend time in the science building, making and experimenting. About 20% of lower school students opt out of traditional recess and decide instead to engage in design and maker projects during their breaks.

“Kids love a challenge. They want to create and use their imagination. In the Lower School, one of our focuses is to give students the opportunities to be problem solvers,” Lower School science teacher Debra Harper said.

Recently, the students were challenged with a new project–making a boat that could float in water. They were instructed to only use supplies that were already in the lab, which included hot glue, tinfoil, and duct tape, among other items.

“They had to figure out how to make a boat that was light enough to float, yet sturdy enough so that it wouldn't get soggy when put in water. Some students chose to use wood, which gave them the opportunity to learn how to cut it into the right shape for their boats,” K-12 Design/Maker Coordinator, Jonathan Braidman said.

The boat project was the kick-off to multiple challenges that will be offered to students throughout the year. Each project will be designed to inspire students to create, build, and tackle unique challenges. There is no right or wrong answer for these challenges - which allows students to be as creative as they want to meet the objective.

“For paddle boats, they have to create a strong frame to hold the two ends of the rubber band, make an X-shaped paddle, and then learn how to wind-up the rubber band to get enough energy for the boat to move in water,” Braidman said. “Sailboats use wind, so students are learning to create a steady framework so that the fabric or felt can stretch over the mast to make a sail.”

On top of working through the maker and design process in their heads, students learned to work as a team – a skill that is valuable at any age.

“I started making a boat and it turned out to look pretty cool. Alex asked to join, and then Miles asked to join. Now we are just working on this boat together every recess,” said Christian W. ’26.

As Christian and his team worked through the project together, there were compromises that had to take place before they were able to move to the next stages of building. Each student gave their suggestions, and with everyone’s input, the group finally reached a consensus.

“It floats and it moves, but we really need to test it in the big pool because it’s really long so we aren’t sure if it will make it all the way across,” he said.

Emmy M. ’26 and her teammate took on a different strategy when they created their boat. They used duct tape and a saucer - instead of creating a sail.

“I think it’s gonna float because I’ve done something like this before and the duct tape was waterproof. I think this idea will work out too,” she said.

After several weeks of building and testing the boats in a small plastic swimming pool, it was time to show the rest of the Lower School what they’d been up to for the month.

Students grades 1-5 gathered around the pool to watch the boats get released into the water. And, even though some of the boats didn’t float, the pool was still abuzz with excitement.

“Just getting something out onto the water is a success. If their boat sank, it meant that they learned first-hand that building materials matter. Next time we do a build, the students will know to try different materials,” Harper said.

As for missing out on a typical recess to participate in the build, Christian, Emmy, and their peers wouldn’t change a thing.

“I just like to design things and that’s why I decided to do this. It’s always fun no matter what happens,”  Emmy said.

Bird's Eye View is a story series highlighting our work towards the initiative and goals laid out in our Strategic Plan: Bridge to 2020.