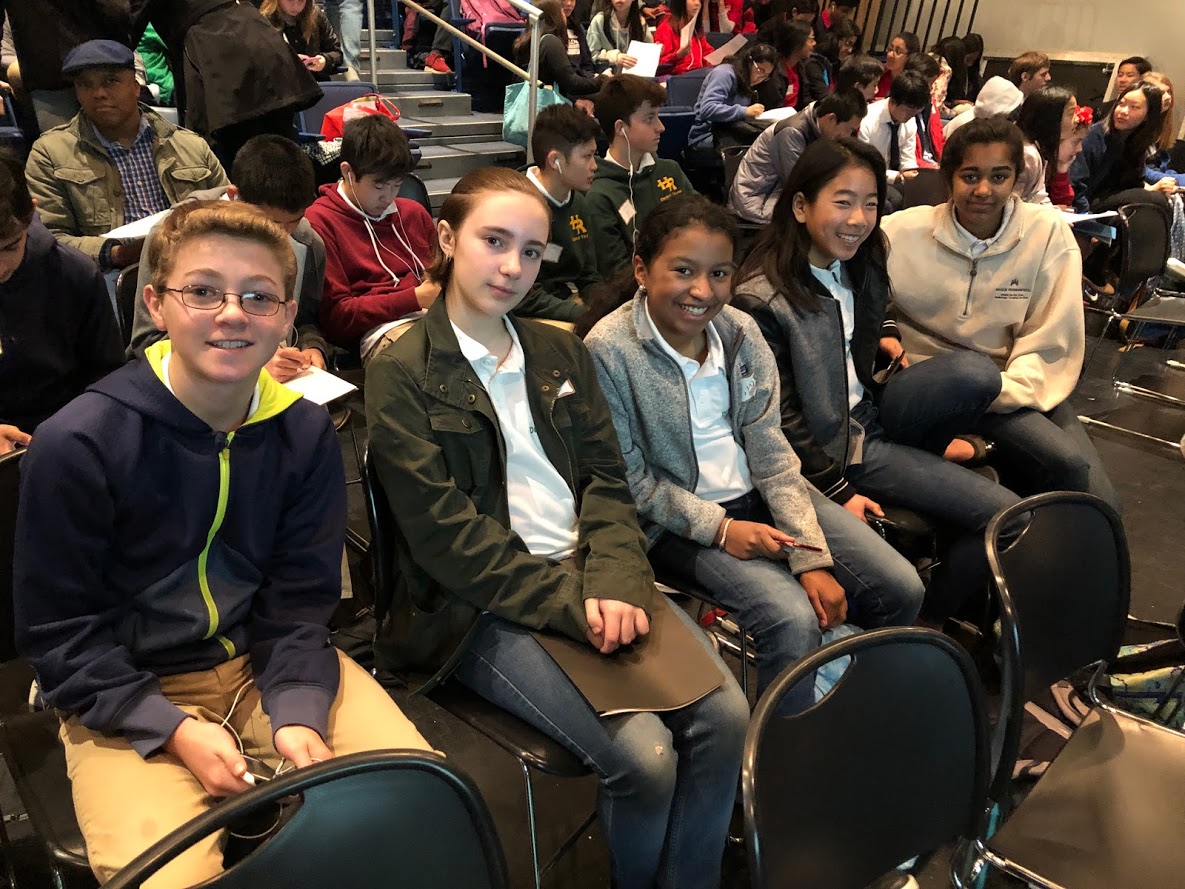 The Head-Royce Debate program is robust because of earnest student interest.  “Nearly nothing is as satisfying as winning an argument or changing people’s minds through words,” says Anokhi M. ’24.

Her avid love for argument paid off: Anokhi was one of two HRS students who earned perfect 80-point speaker scores, for her argument on the advantages of cashless businesses. Kudos as well to Francis J. ’23 for this same honor with his persuasive stance on the benefits of standardized testing!

Special speaker recognition went to Buck A. ’23 and Ian B. ’23 (ranked 4th and 5th, respectively). “I do middle school debate to further understand important topics in our lives and to be a better speaker,” says Buck, adding, “Also to win tournaments.”

Considering the magnitude of the tournament and the current size of the club (over 50 members from grades 6 to 8!), it’s difficult to believe that HRS Debate was born only three years ago, from the vision of then-seniors Amy Lin ’18 and David Wornow ’18 (at CPS) and Alice Chu ’19, with the generous sponsorship of Middle School Head Linda Hoopes and then-parent Teresa Wornow. Since, membership has more than tripled, with devoted leaders like Kailey Fleiszig-Evans, Lauren Kayari, and Bhavana Anguladukati, and other avid HS coaches picking up the torch.

For two hours after school every Friday from September until May, faculty club sponsor Vylinh Nguyen and hard-working HS coaches do their best to stoke and fuel the fire for debate. They meet with fun-loving, intelligent middle schoolers and run mock debates on both silly and serious topics, from “reptiles make good pets” to “convicted felons deserve voting rights.” We also try to keep the competitive season in perspective of core positive values that help our debaters grow not only their public speaking and debating skills, but also their character, confidence, life skills, and mental fitness. Students are regularly reminded to practice HRS’s Five Gs for fun, healthy competition: grace, grit, growth, gratitude, and generosity.

Growing confidence is important to Evie K. ’23, as she says, “I have always had public speaking issues and issues with forming correct words in my mind. Debate helped me open up and become less nervous when speaking in front of others.”

When asked why they give up their Friday evenings, after a long week of rigorous academics, and trade in five Saturdays for the annual league tournaments, Middle School team members, in a moment of unfiltered authenticity, confess they join not only for debate, but also for friendship and the yummy snacks.

What makes this all worthwhile for coaches and parents is watching their beloved middle schoolers in action, leaning into the hard, having fun, and learning in the process. “It’s a weird sort of nice to see passionate kids, unchecked enthusiasm, and poorly restrained coach annoyance intermingle every Friday,” admits US Coach and Former MS Debate Champion Athena Muhammad ’22. “If you look closely, you can even see some people debating,” she says, laughing.

“Frankly, the debate program has proven to be one of the most worthwhile, if not the most worthwhile, endeavor [my four children] have engaged in at Head-Royce,” says Parent Jerry Udinsky, who has been a part of debate since its inception. Students learn, he says, that there are “too many topics and issues to do it yourself. So, they must learn to work together as a team.”

Debate gets rowdy, awaiting the results of the day’s hard work.