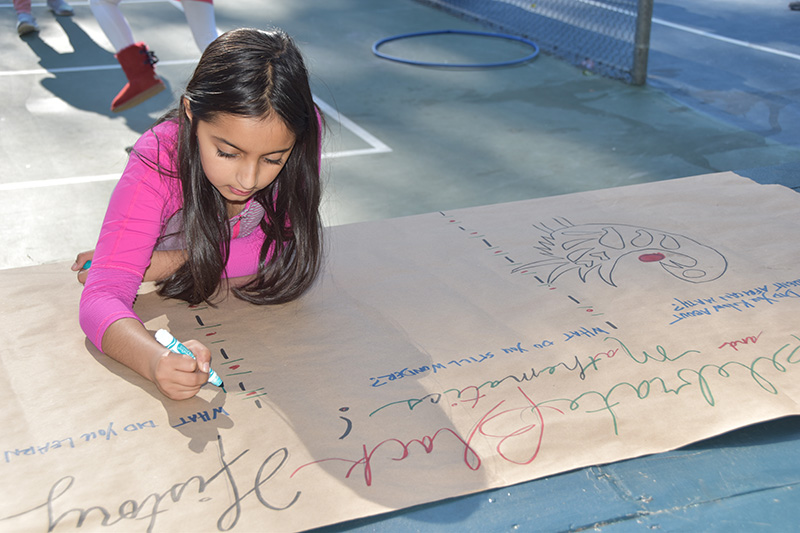 In celebration of Black History Month, teachers across all of our divisions have been highlighting the important contributions that Blacks and African Americans have made throughout history. Through assemblies, lectures, and class discussions, students had an opportunity to delve into an array of topics. But in the Lower School, math teacher Ciara Coleman took a hands-on approach to illustrate how ancient Africans contributed to modern-day math.

“I wanted students to understand that there is a rich history of mathematics within the African American experience. It should be honored and the stories should become commonly known and shared,” Coleman said.

For this lesson, students learned about the various ancient tools used in Africa, and how those tools influenced modern mathematics. The Ishango bone, for example, is considered to be the first evidence of a calculator in the world, and believed to be the cradle of mathematics.

In order for students to make connections between the past and the present, the unit was broken into two parts. At first, the students studied ancient African math, and then looked at the work of modern mathematicians.

“The second part looks at a slave with an amazing ability to perform mental calculations, two women who contributed to the areas of ethnomathematics for NASA, as well as a 2017 honoree featured by the Network of Minorities in Mathematical Sciences,” Coleman said.

In an effort to foster a deeper, experiential understanding of the unit, Coleman set up a table filled with markers, paper, and measuring tools during recess so students could make their own replicas of the Ishango bone. They were asked to make their own renditions of this ancient tool and then use it to measure items on the basketball courts.

The integration of math and history was eye-opening for many.

"I never heard any of it before. It was cool that people a long time ago put something so important together without technology,” Mila E. ’25 said.

The unit wasn’t only an eye-opening experience for students, but for Coleman as well. As she researched the field of ethnomathematics and how Dr. Gloria Ford Gilmer’s work helped us discover and understand the intersection of culture and mathematics, she was overcome with sincere joy and appreciation.

“I was overwhelmed with pride as I came across the stories of so many phenomenal Black mathematicians who achieved excellence within an unwelcoming environment where African Americans were the minority,” she said.

The Ancient Africa Math unit is the first of its kind in the Lower School.