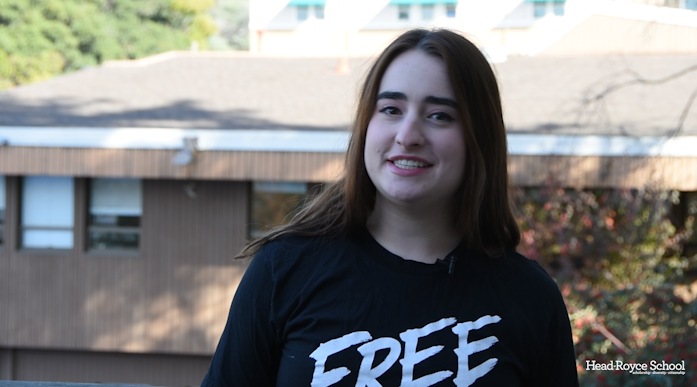 Simone Stevens ’18 was recently featured in The Daily Californian, San Leandro Times, SF Gate, and more. Listen to her words of advice for students who want to get more involved in civic engagement.

Simone Stevens ’18 has been involved in politics throughout her high school career. Her commitment, drive, and passion led her to become the face behind a controversial bill that recently passed in the City of Berkeley banning the use of live fish as carnival prizes. Her efforts researching and writing this successful bill won her peta2's (PETA’s youth arm) Hero to Animals Award in November 2017.

Simone’s rise to the spotlight started last summer, when she interned for councilmember Kriss Worthington’s office. She enjoyed the work so much that she opted to continue her intern role when the new school year began. She credits teacher Geoff Evans for helping her get the internship.

“Rachel Weiler ’06 contacted Head-Royce about needing interns for Nate Miley’s campaign for the County Board of Supervisors. I joined and had such a good time that I decided to continue with the campaign. From there, Rachel knew the campaign manager of Nancy Skinner for State Senate, so I joined that campaign. Those experiences then allowed me to get into Kriss Worthington's competitive intern program last summer,” Simone said.

But being “political” is something Simone said she doesn’t shy away from. In 2nd grade she wrote a poetic critique of the Iraq war from the perspective of a soldier. In 4th grade, she made dolls to raise money for relief efforts after the Haitian earthquake. In middle school, she joined Model United Nations and started applying for prestigious positions. She also ran for Student Body Vice-President and won.

"For me, there has never been a separation between my extracurriculars, how I enjoy spending time, and politics. I do it because I find participating in the political system satisfying. I actually have an extremely hard time fathoming how one could not be interested in politics. The fate of our country and future is literally on the line. I see so many things wrong with our world, so many issues I want to ameliorate, and civic engagement is a direct route to doing just that,” Simone said.

Women’s Rights is another area she is passionate about. This passion also led her to be the face behind another controversial bill that was heard at the Berkeley City Council.

“I proposed a piece of legislation that would have equalized nudity laws between all genders by decriminalizing the public display of female breasts. Though the bill was eventually tabled, it was a fabulous experience and I am dedicated to getting it untabled by working with different councilmembers,” Simone said.

Simone graduates from Head-Royce this year and is interested in majoring in International Relations, Political Science, Economics, or Accounting.

In addition to being featured on several local news outlets, Simone’s work has received attention on national networks, including Fox News and ABC7 Chicago.

Bird's Eye View is a story series highlighting our work towards the initiative and goals laid out in our Strategic Plan: Bridge to 2022.