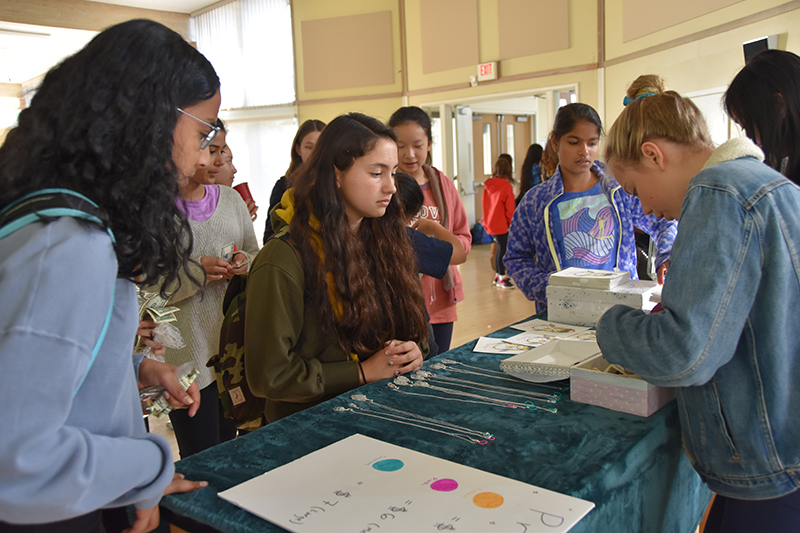 CIVIC ENGAGEMENT: Middle School Entrepreneurs Give Back to the Community
Keisha Courtney
Feb 7 2018

For one lunch period during the school year in the Middle School, the community room is transformed into what looks like a bustling farmer’s market. Middle schoolers (along with some teachers) walk from booth to booth sampling handmade goods, including sweets, bath products, and stationary, while other students stand behind the booths answering customer questions, analyzing numbers, and counting back change.

This unusual classroom set-up only happens once a year, but for the students who are running the booths and selling the products, it takes more than a couple of weeks to get to this point. This entire production is the Middle School Math Marketplace.

“The math marketplace came about as a way to engage kids in the concept of linear equations. I wanted to engage kids in a real life understanding of what a variable means (unit price) and what a constant represents (fixed cost),” math teacher Lisa Van Kirk explained.

Students were tasked with coming up with a compelling product they could market. Working in pairs, they drafted business plans that included an executive summary, a marketing plan, and a financial plan. The marketing portion of the plan included a survey to gauge customer interest, equations that determined a viable price, and a sales forecast. The financial part of the plan included a detailed cost analysis and break-even point.

Some pairs initially came up with plans that weren’t financially viable, so they had to iterate. Dealing with real money created even more of a challenge for many.

“They are used to doing math with really no consequences, except maybe getting the answer wrong. Now they have real money riding on their math calculations!,” Van Kirk said.

The work didn’t end once sales commenced--they still had to do calculations while selling their products. If they found their products weren’t selling as anticipated, they had to reanalyze the market and amend their prices if necessary.

The money that is collected from math marketplace is given to a charity of the students’ choosing. This year, they were able to raise about $1,200 from selling their products, and all of the money was donated to the California Fire Fund to help the victims of the fires that ravaged California last year.