A New Nest for the Robohawks
Keisha Courtney
Sep 25 2018

A little over eight years ago, three intrepid Head-Royce students gathered in a family garage with a shared goal: together they would create a robotics team that could hold its own with peer schools, many of which already had formalized robotics programs in place. What nobody knew or could even anticipate, is how this small band of tech enthusiasts would grow into an internationally-ranked force, successfully competing with teams from China to Mexico at last year's VEX Robotics World Championships to finish in the top tier of the 10,000 teams represented from across the globe.

How did this happen? The story begins in the Oakland garage of alumni parents Alex Chan and Shelly Wong, who, in 2010, generously offered up their space for the budding team to spend weekends and after-school hours developing and honing their skills. Each year, the team grew — in both skill-set and numbers —enjoying hard-earned success at 10-15 local competitions each year, and paving the way to an international level of competition that put the Robohawks on the map as a serious contender.

The team's challenge each year is to design, build, and program several robots that can successfully execute a complex series of tasks that are assigned each year by VEX Robotics, the organization overseeing scholastic competitive robotics. In this sport, persistence pays. Students work with the same challenge (referred to as the "game") all year long; developing, practicing, tweaking and refining their robots. Robotics pushes students to think fast and outside-of-the-box to come up with solutions. Robohawk Phillip C. ’20 explains, “I think robotics is a really great way to foster creativity and problem-solving. The thing I like the most about competing is seeing the robot that you have built in action, with all the different parts coming together.”

The work is long and can be exhaustive — and the Chan-Wong family hosted many weary Robohawks overnight throughout the years. Indeed, the team is supported by a dedicated group of parents who offer critical support in a variety of ways, from serving as volunteer coaches to coordinating travel logistics for competitions or meals for the long practices.

With the graduation of the Chan-Wong's youngest Robohawk last year, the team needed a new space, and Upper School Head Carl Thiermann invited the opportunity to house the program on campus. Robotics requires a space large enough to accommodate a 12’ x 12’ regulation-sized practice "field," and he was able to secure a sizeable space adjacent to the Chapman Pavilion for the Robohawks to call home. Thiermann shared, "The robotics team is very much in alignment with our goals for experiential learning, where students can really delve into the world of STEM and Artificial Intelligence. Students must also collaborate to engage in problem-solving and innovation on a moment's notice." His hope is that the new space may also allow the School to grow the program over time.

Phillip C. ’20 added, “The new space on campus will go a long way to making robotics a permanent fixture at Head-Royce and legitimizes the program. I think that with the added exposure of being at Head-Royce, robotics and the Robohawks will continue to expand.” 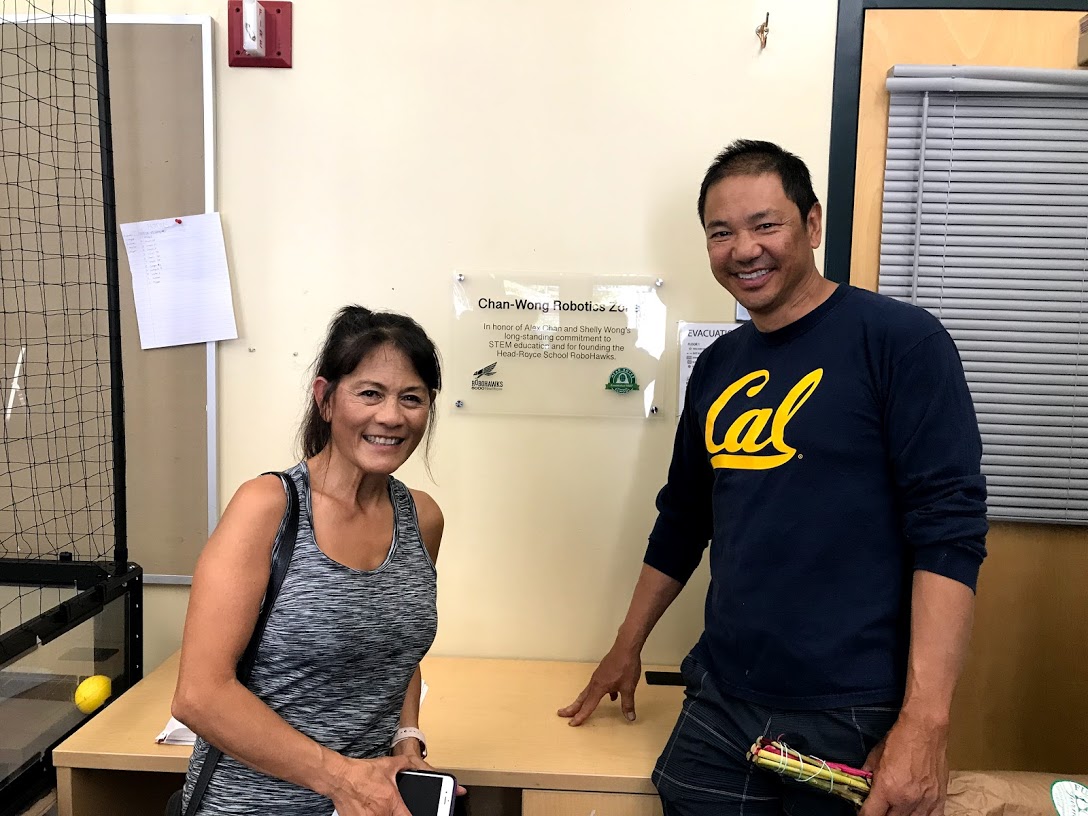 The shift in the team’s home-base does not, however, mean that the Chan-Wong family is no longer a significant part of the program. Current and former Robohawk parents recently rallied together to raise money to reserve the naming rights for the Chan-Wong Robotics Zone on the new South Campus. When construction is completed in the next few years, the Robohawks will enjoy a new dedicated space for their practices, complete with a field and a gallery to display some of their robots.

In the meantime, the Robohawks are already off to a promising start in the new season — Team B made it to the finals at the Dublin Robotics Tournament on Sunday. Go Robohawks!